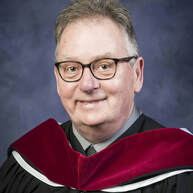 ​Brian Thompson was born in Ottawa and currently lives in Woodlawn. He is married to Keltie and has two daughters, Xavier and Nora. Keltie is an editor for the Federal Government, Xavier is an internal medicine doctor in Nanaimo, living with her husband Alastair, an infectious disease doctor and Nora is studying forensic psychology at Carleton University.

Brian loves to work with his hands and has been involved with various technologies over the years. He also loves music and started his work life as a musician in the Governor General Foot Guards Band. During that time Brian also played bassoon in various musical groups and orchestras in Ottawa and Vancouver. Music is still an important part of his life.

In 1986, Brian moved to Toronto to work at the Royal Ontario Museum making tools and developing technology for museum curators. Bloor Street United was the family’s church at that time. It was next door to The Royal Conservatory of Music which made it an even more wonderful place to praise God.

They moved back to Ottawa where Brian took a job at the Canadian Museum of Nature and then to various high-tech companies. He worked at Canadian Astronautics where he worked on the Canadarm and at Nortel where he worked on telemedicine and other interface designs. After Nortel he ran a company that built agricultural applications for Prince Edward Island and tourism applications for the National Capital Commission.

About 10 years ago Brian became a Licenced Lay Worship Leader (LLWL) for some 30 churches in the Valley. He then took the Master of Divinity (M. Div.) program at The Atlantic School of Theology in Halifax and graduated in 2019. Brian was a student minister for two and a half years at a church in Quebec and for half a year in Dartmouth, Nova Scotia.

When Brian is not recording services for the Pakenham Pastoral Charge (PPC) he develops courseware, invents board games, writes music, takes part in local theatre, cooks and works in the garden.

Brian is blessed to have his wife Keltie and daughter Nora helping with his online ministry at the PPC. Brian, Keltie, and Nora are planning to join the St. Andrew’s choir when we are all back to worshipping side by side.

Brian says, “It is with gratitude that I now answer the call to do this work for the PPC. Of all the things I have done, the work of holding open the space for our journey with Christ has been the most important. Thank you. I’m looking forward to being with everyone soon!”